Warning: Use of undefined constant wpptopdf - assumed 'wpptopdf' (this will throw an Error in a future version of PHP) in /kunden/306124_91054/webseiten/wp-content/plugins/wp-post-to-pdf/wp-post-to-pdf.php on line 40 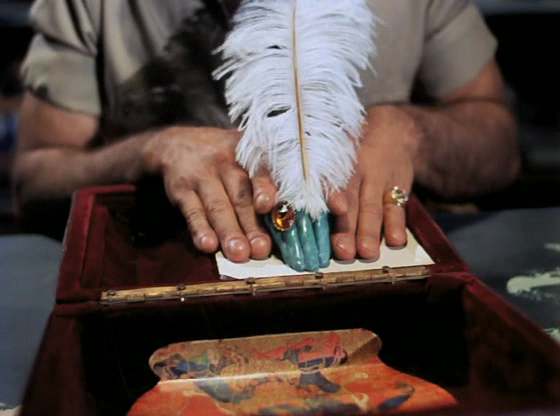 Two highly distinct approaches become discernible when taking a closer look at Roberta Findlay’s post-porn career in mainstream filmmaking. The, be they gritty or be they tender in nature, highly personal stories told in the quite straight “Tenement” (1985) and “Lurkers” (1988) as well as the madcap insanity prevelant in in the more tongue in cheek than anything else “Blood Sisters” (1987) and this one, her very first film post transitioning. More in line with the snarky, self-deprecating public persona the introverted directress created for herself than her remaining filmography, they revel in a unique, utterly off-beat understanding of humor while falling somewhat flat in their more traditional conceptions as horror films. In contrast to some of her greatest achievements in Golden Age pornography, they are always two steps away from outright comedy, playing the game straight and yet sabotaging the expecations of a horror crowd with small, intentional but never narrative based acts of directorial transgression. Big guy John Fasano fleeing the scene in the most hilarious fashion imaginable and the way Elizabeth Rose’s glasses seem to prefer viewing directions of their own volition otherwhile – weird flourishes like these place “Blood Sisters” in its own goofy corner equal steps adjacent to completely serious and satirical peers. Even more than Findlay’s sorority girl slasher “The Oracle” utilizes these interfering agents to bridge what would otherwise be considered barren gaps in a drawn out horror narrative – with sound being, as per her unmistakable habit, one of the prime instruments.

First present during the opening’s radio induced crate hauler gymnastics right out of any eighties pop video music either lends a slight twinkle of the eyes to all proceedings or a creepy edge. As mere minutes later a distorted version of “Merry Christmas” accompanies the aftermath of hired killer Farkas’ (Pam La Testa) first murder, always slightly out of key and distant like some remnants of happier events drippling in from the outside it generously drenches the splatter in thick melancholia as the androgynous massif irresolutely cleans up in shabby bathroom. Potentially butchered by the very same recording device responsible for La Testa’s notorious post-dub voice mangled Christmas melodies and other traditionals remain a fixture. They set the stage, bestow artificial hues on otherwise mundane occurrences. An irritating variant of “Greensleeves” matches the volume of a later phone conversation between Farkas and her mysterious employer, robotic vocal chords and music in delightful unisono – unnerving not by the implication of impending bloodshed but deliberate dissonances alone. Don’t be fooled – “The Oracle” is certainly Roberta Findlay’s most explicitly violent film, easily surpassing the scant excesses of “Prime Evil” (1988) and grounded terror of “Tenement”. Slimy guck mutants corrode a poor janitor in graphic detail, an eyeball gets stabbed out, a head ripped off, but it’s done with a child’s gleeful manner and a prideful display of latex gibs – all in good fun so to say. The mindset behind these gorey debaucheries is perhaps best laid bare by an old interview excerpt:

The special effects were the most difficult thing about The Oracle, but the guys did a great job. […] You can never allocate enough time to shoot them. Our decapitation took a day. When the audience sees it, they want to throw up, but when you’re shooting it, it is pretty funny. The camera got splattered with blood, and I was always covered in gore.

Just as much playful experimentation on what works and what not as the way she sets up an angle or assigns music to a scene the violent outburst at hand are manic tops clashing with the tender downs evident in every Findlay film, creating a maze of contrasting impressions for the viewer. Our navigator in times we get lost: the always guiding powers of music. These distorted melodies are not only cursory shocks but structuring elements indicating a change in climate. Be it a friendly mall chat between heroine Jennifer (Caroline Capers Powers) and one of her friends or the glaring deviation taking place after the above mentioned opening slaying – they alert us to and forge one shape out of encounters at opposing sides of the emotional spectrum. And so the bloody murder of a prostitute that could stem straight from William Lustig’s gloomy serial killer ballad “Maniac” (1980) fizzles out into weird, almost documentary style impressions of winterly New York City at night. Farkas taking a sedated stroll, being spied upon in observant attention to detail by the camera while eating out at a burger joint – strangely trivial proceedings nonetheless tied into a conjoinded dinner scene with a far more happy Jennifer and friends. There is an eccentric rhyme to “The Oracle” shifting sequences of the exciting and unexciting, a deep rooted insecurity about life present in varying degrees all over Roberta Findlay’s body of work. For a showcase of jolly splatter vignettes the film’s framing remainder is remarkably chilly, really a closer relative to “Maniac” than one might expect. Exchanging Lustig’s unflinching depictions of human brutality for equally fine-grained ones of ghostly terrorizers kicking up a fuss, the principal gaze on the Big Apple nevertheless remains close to interchangeable. The fast paced life associated with the capital city is substituted for strangely chill all turquoise corridors and striking shots of subjective gazes up and down an endless T-shaped street filled with snow and parked cars arranged in a flawlessly even spread, as if on display. Placing it among horror cinema’s coldest Christmases a directorial hand akin to the gravely one featured prominently in the narration chokes all devious fun out of the free-form playground at times. An irritating contrast.

Playful shots through obstructing windows of phone boots or cars that bear nothing of real relevance to the flimsily established character outlines, the atonal, droning compositions of Walter E. Sear and Michael Litovsky – this is Roberta Findlay’s take on the disparity of images burried in a narrative and autonomous from it. Subjective camera perspectives return once more as a device of immersion, but instead of placing viewers in the shoes of bystanders of the good and not so good variety, like “Tenement” would do mere months later, they encourage an audiovisual experience somewhere between the pleasingly nostalgic flânerie associated with a tunnel of horror and a no-holds-barred roller coaster. Fittingly everything feels quite a bit on rails, not the ones generally attributed to especially conservative writing though, instead a flashy outline dictated by sorrounding contructions. “The Oracle” is Roberta Findlay’s most architectural film and somewhat of an exuberant agglomeration, a uninhibited absorbation and disgorging process of enviroranmental cues observable in a the Hollywoodian Golden Age diet that shaped her own vision of cinema. Adding an instantly tangible side to the meta-maze described above most layouts of the painstakingly well chosen appartment and industrial buildings feel constricted by no small degree. A plethora of chases take place in their strange tunnelesque hallways, their race courses boxed by pipes and boilers – people rushing through these confines, caught in frontal views by the camera, but never catching up to her. More than once this seems like an elaborate extension of the strikingly similar nightmares Olga Karlatos experiences in Lucio Fulci’s New York City giallo “Murderock – Uccide a passo di danza” (1984), but the world created in “The Oracle” is neither dreamscape nor real, it just shapeshifts alongside the flow and few contemporaries knew how to keep that one going like Findlay did. In what likely constitutes the most elegant POV shot of her entire career as a cinematographer the amusement park theme comes – in the truest sense of the word – full circle. Taking a run for the pursued Jennifer the camera cuts corners left and right in an ever-increasing frenzy, paces through a curve filled with a museum’s enticing exhibits while sadly suffering from tunnel vision and all of a sudden reverses its course by means of rapid 180° turn of the heels.

Roberta Findlay effortlessly switches between a multitude of paces and moods, keeps them under strict control by means of hard cuts, musical tempi, the imposing power of her own less than 100 pounds frame behind the lense. “The Oracle” is perhaps her most experimental work outside of the Golden Age’s realm, devious, hard to make sense of and yet as captivating as the little Christmas gesture that perfectly sums up its own nature: Pam La Testa popping “Happy Chanukka” balloons with her switchblade.