Warning: Use of undefined constant wpptopdf - assumed 'wpptopdf' (this will throw an Error in a future version of PHP) in /kunden/306124_91054/webseiten/wp-content/plugins/wp-post-to-pdf/wp-post-to-pdf.php on line 40


The typography of bidding farewell: Buddies (1985) 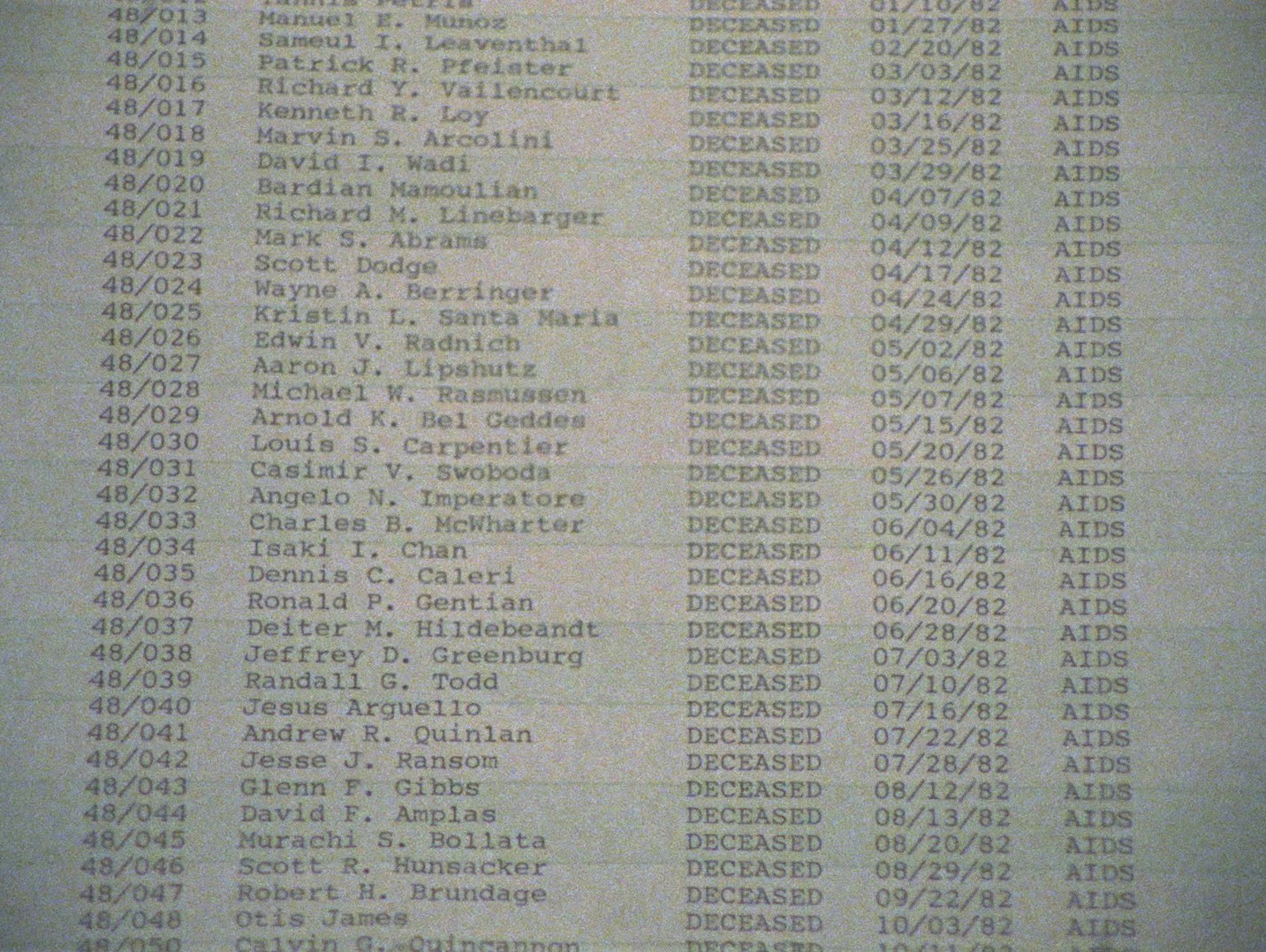 “Buddies” – the cinematic swan song of noted gay pornographer Arthur J. Bressan Jr. – is a highly unusual film, less as a result of the obvious expectations evoked by a small scale and utterly devoid of explicit sex chamber piece between just two characters of importance, more because of its striking insistence to structure a visual narrative entirely around its main character’s chosen profession. David Bennett (David Schachter) is a timid young typesetter through a voluntary programme assigned as buddy to formerly outspoken gay rights activist Robert Willow (Geoff Edholm), a man inescapably and quite miserably dying from AIDS in the dull confines of his hospital bed. Both men slowly grow accustomed to each other, share sometimes heated, sometimes aperitive discourses on coming out, the pitfalls of publishing ardently anti-gay voices’ epistles first, then a good laugh watching old holiday videos and lastly the scant intimate moments their surroundings and Robert’s illness permit. Hardly a minute of film is lacking either man’s presence and yet almost everything we see stems directly from the eyes of David, or rather his hands – for they create what we absorb. Stories of last breaths sighed in the shadows, of individuals turned into mere numbers by the frightening grip of a cold, non-selective pandemic defying any try at emotional apprehension.

Bressan’s film opens up and closes with an ongoing list of these casualties, committed to the austere surface of plain printing paper. Variations of this factual grasping process frame the developing relationship between David and Robert as well. Waking up following the overwhelming impression of their first encounter the former, shrinked by a low angle shot and the Academy frame, opens the blinds cloaking his appartment in darkness. Light shoots in instantly around him, illuminating the room, more importanly though the slim edges of each and every slat, making them appear like thin lines of illegible dark black writing amidst the eye-popping white. Sleep has obviously sorted at least a fracture of yesterday’s impressions. Fragmentations like these are the modus operandi employed to approximate something that cannot be understood in total by filmmaking alone, that can much rather be digested in small doses and pre-abstraction. “Buddies” recounts the procedure of adjusting your gaze over and over on a small scale – till everything fits right in the big picture. Slowly Carl Teitelbaum’s camera eye follows David around in a tracking shot alongside an obstructing chain-link fence – trapping him, as one might say, but the truth is a tad more subtle: When figural and mechanical movement alike ceases, he finds himself seated on the ledge of a walkable rooftop, finally able to ponder in peace and fitting right in the final mesh to the right of the cadrage. Another time a slow, intensely long zoom reshapes David’s monologizing profile into nose and right eye alone or the closed arms of a weight training station in close-up leave barely room enough for the left ocolus.

But there is a more literal plane to these motifs too – panning across spread out memorabilia of Robert’s better days the camera turns fragments of life into fragmentations on film, directly translates what little tangible matter remains of a life about to end into media to be consumed by more than the select audience that are fictional relatives. In an impossible to overlook room-bridging montage this method goes full circle, becomes a connector between on-screen characters in anguish and their safely seated onlookers via lumps of conserved information. Prematurely ending a sweet afternoon of indulgence in old 16mm holiday reels the camera rapidly zooms out of the film in a film that just a moment ago seemed to be one with our viewing experience and reduces the projected image to a roughly piece of paper sized square on a drab wall. Our “Ummagumma”-esque portal to another world it turns out, as an instant hard cut spits us out in a panorama of David’s nightly office. On his screen in close-up: his writing on the prevalence of AIDS in heterosexual African relationships. The screen blurs, then another cut places us back in front of Robert’s impromptu silver screen; same degree of distance as before, same holiday, but instead of moving pictures he is now busy reliving moments preserved in their at least for now endless afterlife on dias. Bressan, himself stricken ill by the disease and in his final two years of life during production, apparently understood a well-kept or – in keeping with the shape of his film – appropriately typeset retention of a human’s fleeting existence as a veritibale time capsule. And rightfully so. His film is of everlasting importance even for a generation that understandably fails to grasp the impact of the 1980’s AIDS paranoia – as an accurate and heartfelt chronicle, a veritable testament left to be rediscovered by courageous gay audiences, but also in quite a different way: “Buddies” is a queer film in every fiber of its body, yet homosexuality is surprisingly irrelevant to its underlying concerns on conservation. A universal visual approach encompassing the deeply personal narration, so to say. Embodied by a man so devoid of colorful personality traits, turned into all but a shell to filled at your own discretion. Perhaps even more so than one to the deceased, this is an ode to the meek and monogamous amidst the gay community, the survivors, the ones who live to recount the bold tales of their peers to the world … long after these treasured friends have taken their permanent leave.